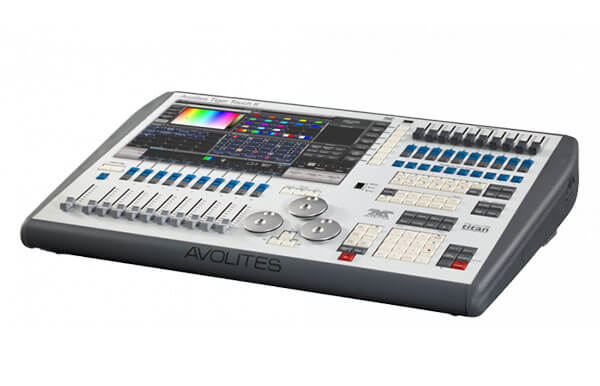 We have recently added a pair of Avolites Tiger Touch 2 consoles into our hire stock.

The third generation Tiger Touch boasts a 100% brighter screen, a front panel loading USB and a harmonious panel button layout. The button layout now allows users to use the familiar layout from the Titan Mobile all the way to the Sapphire touch.

The Avolites Tiger Touch 2 represents the perfect combination of maximum power and small size. Small and light enough to fly in standard hold luggage, even in a suitcase if necessary, but with enough power for large complex shows.

With 20 submasters separately paged as two banks of 10 and a further 10 macro or executer buttons. You have at your fingertips instant hands on control, harnessing the power of the Titan operating system.

Outputting up to 16 individual DMX universes, and with expandability to 64 DMX universes using TitanNet, you will not be short of control channels.

Titan software is a superbly flexible console operating system designed and developed by Avolites. Titan gives you the ability to get a show on with the minimum of pre programming.

The Avolites Tiger Touch 2 is based around a large touch screen with high quality switches, encoders and faders. And the ability to utilise a second outboard screen or touch screen.

For more information on any of these
articles please contact us.

Our news, thoughts, inspiration and other items that interest us

Any cookies that may not be particularly necessary for the website to function and is used specifically to collect user personal data via analytics, ads, other embedded contents are termed as non-necessary cookies. It is mandatory to procure user consent prior to running these cookies on your website.