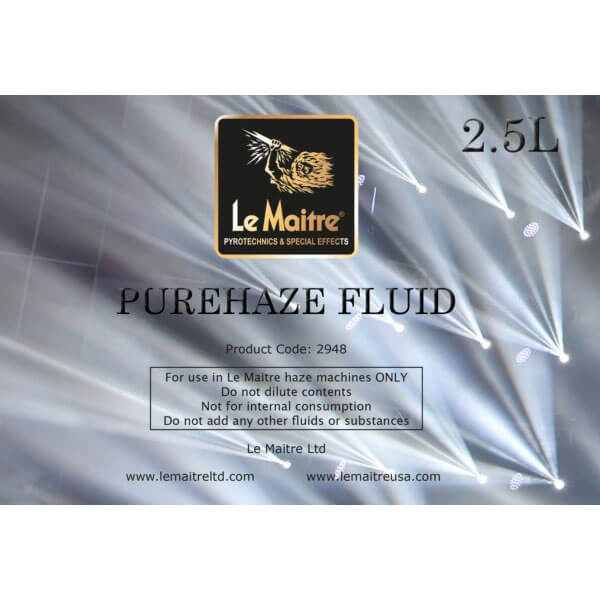 Le Maitre Pure Haze Fluid 2.5L is specially formulated to produce very dry and very long lasting haze. Designed to hang in the air and accentuate beams of light. Resulting in some of the best haze for lighting enhancement.

Le Maitre Pure Haze Fluid 2.5L is used in much smaller proportions to smoke fluid. Thus giving the benefit of atmosphere without the large consumable cost.

Le Maitre’s haze fluid is sugar and water-based with 90% active ingredient. Therefore completely safe to use on live stage performances. Le Maitre has participated in several reports on equipment guidelines, calibration and health effects on the use of theatrical smoke and haze

Le Maitre’s haze fluid is sugar and water-based with 90% active ingredient and completely safe to use on live stage performances. Le Maitre has participated in several reports on equipment guidelines, calibration and health effects on the use of theatrical smoke and haze as prepared by bodies including ESTA and Environ and copies of these reports can be found on the Equity